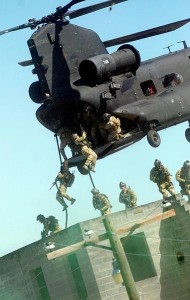 There are reports of another revolutionary use of 3D Printing. If the words doing the rounds in Panama City Beach are to be believed then the US Navy is set to get unfair advantage of 3D printing on the field.

New concepts in 3D printing technology are under test right now. 3D printers are being used to produce equipment, parts and even vehicles that are essential in combat. At this stage, the production is completely for analysis of the hardware. These research and experiment are expected to make the already mighty military even more powerful.

The Navy has a 3D printer technician who is experienced in creating everything from elephants to small trucks with the help of 3D printers. He has even produced model of a boat with 3D printing technology. Its creation took nearly forty hours. However, the same task would have been much more costly and would have taken considerably longer had any other process been involved in it.

Things that typically take months in production can be created in a few days with the help of 3D printing technology now. Undoubtedly, 3D printing is expected to revolutionise manufacturing industry. There may come a day soon when a person visits an automotive parts store for certain gear and asks for a 3D printed model of the same in case of inventory-stock shortage.

The 3D printing machines have quite advanced capabilities. It is true for producer sector, consumer sector and commercial sector. 3D printing business can be very profitable activity as it can potentially attract investment by both commercial establishments and military. Simultaneously, it has showed consumers what and how much can be done right at home. From the capability to create just another item for some work to the scope for a different level of creativity for artists, it seems 3D printers are rightly being onsidered as the next great technological innovation.

On the other hand, 3D printer can be the innovation that may help the US Navy achieve its quest of attaining the apex position among naval defence forces in the World.